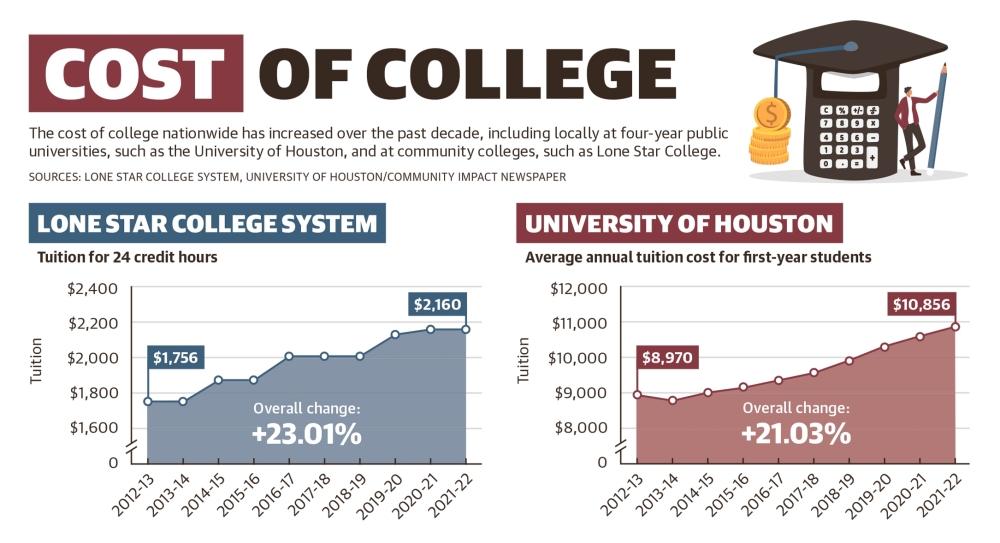 As the cost of higher education continues to rise and more students rely on federal loans to pay for their degrees, short-term relief may be on the way for those struggling to get out of their debts, while questions remain about a long-term solution.

Adjusted for inflation, the average annual cost of attending a full-time four-year college—including tuition, fees, room, and board—in the United States rose from 10 $231 in 1980 to $28,775 in 2019-20, an increase of about 180%, according to the National Center for Education Statistics.

“We’ve been telling everybody for decades, ‘You have to go to college.’ So the demand has gone wild, and many colleges aren’t functionally much bigger than they used to be, so every seat is more expensive,” said Dietrich Vollrath, professor and chair of the Department of Economics at the University of Houston.

Data from the Federal Reserve System shows that more than 45 million borrowers nationwide have contributed to approximately $1.75 trillion in accumulated student loan debt, with more than $1.6 trillion of these loans issued by the federal government. In Texas, 52% of college graduates in the 2019-2020 school year had student loan debt with an average debt of $26,273, according to the Institute for College Access & Success.

In the seven ZIP codes that make up the Lake Houston area, data shows that just over 151,000 people aged 18 and older have at least some college experience, or about 64.5% of the local population aged 18 and over. 18 and over.

To provide relief, President Joe Biden announced a plan on August 24 that will allow about 43 million Americans to get up to $20,000 in federal student loans forgiven.

Betsy Mayotte, president of the Institute of Student Loan Counselors, said while she supports the plan, it does not address the root cause.

“Everyone is talking about the student loan crisis, and it’s there, but it’s a symptom, not the problem,” Mayotte said. “The problem is the cost of higher education, and this plan does nothing to address that.”

While inflation plays a role in raising the cost of a college education, Vollrath noted that two additional factors have caused tuition to rise.

According to Vollrath, wealthy economies such as the United States tend to experience faster rates of inflation for services such as education and health care compared to manufactured goods, because the cost of producing these goods decreases over time.

Vollrath said the second contributing factor has been a decrease in financial support from state governments. Between 2008 and 2018, state spending on higher education in Texas fell from $9,256 per student to $7,107, a decline of 23.3%, according to data provided by the Center on Budget and Policy Priorities.

“We’re getting about half the money we thought we were getting 20 to 30 years ago, and you have to take that into account, so it usually ends up being offloaded to students,” Vollrath said.

During the same period, the average cost of tuition at public four-year colleges in Texas increased by $2,302, or 30.4%, according to CBPP data. However, Vollrath said he doesn’t think the blame should be directed solely at declining state contributions to higher education.

“I think there are definitely things you can talk about on the college side,” he said, speaking generally of public colleges. “Why are universities paying for things that seem to drive up tuition and don’t seem to contribute to the foundation of a student’s education?” »

Basics of the diet

“No high-income individuals or households – in the top 5% of income – will benefit from this action,” the statement said.

Additionally, the White House announced that the pause on federal student loan payments would be extended one last time through December 31 and that borrowers should expect to resume payment in January. According to the release, an application process for borrowers to apply for relief will be available before the pause in student loan repayments ends.

The Department of Education is also offering an income-based repayment program under the plan, under which monthly payments for undergraduate loans will be capped at 5% of the borrower’s discretionary income, or about the half the rate most borrowers are paying today.

The plan also aims to improve the Civil Service Loan Forgiveness Program by proposing a rule that borrowers who have served in the military; worked in a non-profit organization; or worked in the federal, state, tribal, or local government receive appropriate credit for loan forgiveness.

Across the Lone Star College system, which represents Lone Star College-Kingwood, the cost per credit hour this fall is $96, up from $88 for the 2021-22 school year. Despite this increase, however, LSCS Chancellor Stephen Head said the college system was still cheaper than a four-year college.

According to Head, less than 10% of the student population in the community college system borrows, but for those who do, the average amount borrowed is $6,000 per year.

” The pro [of the plan] is the relief for student borrowers,” Head said. “Downsides include the fact that many of those who have received loans and repaid them believe this decision is not fair.”

“Eighty-seven percent of people don’t have a student loan, [so] you have 87% of people who have either paid off their student loans or never had one, and they work in a blue collar job, and they don’t need a college degree, and now the their tax money should go to this?” Crenshaw said at a Partnership Lake Houston luncheon on Sept. 30.

Although Head said the plan will provide temporary respite, he believes its longevity is short-lived.

“It’s a short-term fix,” he said. “There is still a lot of work to be done to find long-term solutions.”

University of Houston officials said their stance on the issue is consistent with an Aug. 24 statement from the Association of Public Universities and Land Grants, of which the university is a member.

“For public colleges and universities, which educate more than three-quarters of all post-secondary students, addressing long-term state divestment is crucial,” the statement said. “Decades of divestment have left students bearing a growing share of the cost of college despite the vast societal benefits of a college-educated workforce and citizens.”